Fethullah Gülen on “Islam and Terrorism”

In our modern day, the relationship between Islam and terrorism is greatly debated. Can terrorism be considered a way of struggle for freedom? What is the Islamic alternative to terrorism and struggle?

Fethullah Gülen: As I said in an interview with Nuriye Akman for Daily Zaman, today, at best we can say that Islam is not known at all. Muslims should say, “In true Islam, terror does not exist.” No person should kill another human being. No one can touch an innocent person, even in time of war. No one can give a fatwa (a legal pronouncement) commending this matter. No one should be a suicide bomber. No one can rush into crowds with bombs tied to his or her body. Regardless of the religion of these crowds, this is not religiously permissible. Even in the event of war – during which it is difficult to maintain balances – this is not permitted in Islam. Islam states; “Do not touch children or people who worship in churches.” This has not only been said once, but has been repeated over and over throughout history. What Our Master, Prophet Muhammad, said, what Abu Bakr said, and what ‘Umar said is the same as what, at later dates, Salahaddin Ayyubi, Alparslan, and Kilicarslan also said. Later on, Sultan Mehmet II, the Conqueror, also said the same. Thus, the city of Constantinople, in which a disorderly hullabaloo reigned, became Istanbul. In this city the Greeks did not harm the Armenians, nor did the Armenians harm the Greeks. Nor did the Muslims harm any other people. A short time after the conquest of Constantinople, the people of the city voluntarily hung a huge portrait of the Conqueror on the wall in the place of that of the Patriarch. It is amazing that such behavior was displayed at that time. Then, history relates that the Sultan summoned the Patriarch and gave him the key to the city. Even today, Islam is not understood properly. Islam has always respected different ideas and this must be understood for it to be appreciated properly.

I regret to say that in the countries Muslims live, some religious leaders and immature Muslims have no other weapon on hand than their fundamentalist interpretation of Islam; they use this to engage people in struggles that serve their own purposes. In fact, Islam is a true faith, and it should be lived truly. On the way to attaining faith one can never use untrue methods. In Islam, just as a goal must be legitimate, so must be all the means employed to reach that goal. From this perspective, one cannot achieve Heaven by murdering another person. A Muslim cannot say, “I will kill a person and then go to Heaven.” God’s approval cannot be won by killing people. One of the most important goals for a Muslim is to win the pleasure of God, another is making the name of Almighty God known to the universe.

Dissatisfied youth has lost its spirituality. Some people take advantage of such people, giving them a couple of dollars, or turning them into robots. They have drugged them. This has become a topic on the agenda these days that can be read about in the popular press. These young people were abused to an extent that they could be manipulated. They have been used as murderers on the pretext of some crazy ideals or goals and they have been made to kill people. Some evil-minded people have wanted to achieve certain goals by exploiting these young people. Yes, killing a human is a truly awful thing. The Qur’an says that killing one person is the same as killing all people. Ibn Abbas said that a murderer will stay in Hell for eternity. This is the same punishment that is assigned to deniers of God. This means that a murderer is subjected to the same punishment as a disbeliever. If this is a fundamental principle of religion, then it should be taught in education.

An individual who accepts Islam from the heart will never knowingly take part in terrorism.  The acts of terrorism associated with Islam may have been perpetrated by some Muslims who had not internalized the depth of Islam. Terrorism, as the name itself indicates, is a complicated issue.  Analyzing terrorism is not something that is easy to do.  Despite this, because it is so ugly in its nature and because many Muslims are charged with it, terrorism must be addressed with a great deal of consideration.  Administrators and intelligence agents have to try find the originators and the motivating factors of terrorist activities.  This will help develop international strategies to stop it.

Otherwise, as a result of false analysis and some possible intelligentsia’s services, the issue may be so complicated that some civilizations, nations and civic organizations will be always under threat.  After September 11th, the issue has developed in this direction.  The fear of terrorism has become paranoia in our society.  At an increasing tempo, general feelings and fears of society were exploited.  Terrorist organizations were used by some as instruments of terror to reach their goals through terrorist activities against innocent society.

To my understanding, true Muslims will never involve themselves in such vulgar and cheap activities, even if they are behind in science and technology.  The real factors behind terrorism are worldly advantages and self-interests. These factors have been the main reasons behind “the great games” on earth.  While the main reasons are ignored, all fingers pointed to Islam.

On the other hand, there are many conflicting interests in the Islamic regions, as well as many competing and clashing groups.  Problems such as anti-democratic practices and human rights violations have resulted in the foundation of various disaffected and disenfranchised groups.  Being ignorant and inexperienced, many of these groups can easily be manipulated and used by some.  Some, manipulating these groups, have worked to reach their goals step by step.  Moreover, there are multi-national covert or open organizations who have based all of their efforts on destruction and creation of fear in society. To extend the borders of their activities, they agitate the unhappy segments of society by stirring up trouble and fomenting violence.

Even though, through painstaking and intelligent efforts, the superficial reasons for terrorism may be eliminated, yet, without the above-mentioned considerations, it would be impossible to end terrorism once and for all.  This cursed behavior will emerge under another name. 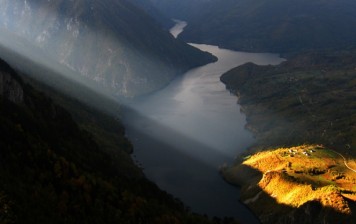 One should seek Islam through its own sources and in its own true representatives throughout history; not through the actions of a tiny minority that misrepresent it. The…

Terror from an Islamic perspective

Islam and terror are like black and white or spring and winter. They are sharply different from each other, and terror cannot approach Islam. In connection with the…

Terrorism has no Place in the Struggle for Liberation

Nigerian students in Turkey say that the Turkish government has declared a war on them and that they feel targeted, therefore they stay in hiding for fear of being arrested or deported. “We are scared of leaving our rooms for fear of being arrested and charged with terrorism, or deported. There is a man-hunt for Nigerian students in Turkey,” a student told The Cable.

Turkey bans math textbooks due to questions including Gülen’s initials

Turkey’s paranoia over the Gülen movement has reached new heights with the government banning mathematics textbooks due to questions involving the initials of Islamic scholar Fethullah Gülen.

Abuja – The House of Representatives on Tuesday urged the Federal Government to quickly intervene and ensure the rescue of 50 Nigerian students detained by Turkish government. According to Rep. Aminu Suleiman, the Turkish Ambassador in Nigeria had requested the Nigerian authorities to close down 17 Turkish schools in Nigeria for alleged link with Hizmet movement.

Turkish govt has declared war on us, Nigerian student cries out from hiding

Nigerian students in Turkey are in hiding following the government’s crackdown on them. “We are scared of leaving our rooms for fear of being arrested and charged with terrorism, or deported. Most of us are in our final year. What do we do?” students said.

Another woman, a former Turkish journalist before the government shut down papers that spoke out against it, said: “I feel like my voice has been taken. People don’t feel safe in London, even going shopping, because we don’t know what radicals will do.”

Turkish President Recep Tayyip Erdoğan’s extra-legal roundup of scores of presumed supporters of the failed July 15 coup against his government is quickly taking its place in modern history alongside Stalin’s purges and China’s Cultural Revolution.

Dr. Ismail Sezgin of the Centre for Hizmet Studies in the UK highlights the 13 criteria, based on Turkish PM Binali Yildirim’s statement, to identify Gulen supporters, who the regime considers terrorists. The arrests and purge in Turkey are made according to these criteria. Dr. Sezgin explains that these are nothing to with coup-plotting or terrorism. With these criteria the government of Turkey can anyone and this is what has been happening in Turkey.