Kurdish Question and the Hizmet Movement in Southeast Turkey: A Brief History

The development of the Gülen movement, also known as the Hizmet movement, in Kurdish-populated cities goes back to the late 1980s. The first Hizmet institutions were university exam prep centers (dershane) in Diyarbakir and Urfa in 1988. Hizmet’s educational initiatives were financed by local businessmen, who developed friendship ties through weekly tea conversations (sohbet). Hizmet’s charity activism is aimed at removing prejudices in both Turkish and Kurdish constituencies, and accordingly, building social trust in the long run.

The development of the Gülen movement, also known as the Hizmet movement, in Kurdish-populated cities goes back to the late 1980s. The first Hizmet institutions were university exam prep centers (dershane) in Diyarbakir and Urfa in 1988. Hizmet’s educational initiatives were financed by local businessmen, who developed friendship ties through weekly tea conversations (sohbet). In his research on the Gülen movement in the city of Mardin, Mehmet Kalyoncu explains how these sohbet meetings were crucial in raising consciousness among the Kurdish population:

Between 1988 and 1991, periodic sohbet meetings served as an agent of outreach. These meetings took place in the participants’ houses on a rotating basis, and through them more people were brought to understand the necessity of doing something to combat deprivations in the city, especially in the field of education. Most of them agreed that the state was unable to provide the necessary education services not only in Mardin but in all of southeastern Turkey. In fact, some of them even thought that the ultra-secular state deliberately deprived the region of schools and other basic services to punish the region’s Kurdish population. Either way, the unchanging realities were that the number of unemployed and uneducated youth in Mardin steadily increasing and these people constituted the main recruitment source for both PKK and Hizbullah. Eventually, they all agreed that the local people would have to bear the responsibility of tackling the education problem in Mardin. (1)

In addition to prep centers, Hizmet volunteers established private high-schools in the early 1990s. The main curriculum and philosophy of these schools followed the path of earlier Gülen movement schools in Western Turkey such as Yamanlar and Fatih. (2) These expansive projects were often followed by successful establishment of local sohbet networks, which reached out to wealthy Kurdish businessmen in Istanbul for funds.

Atak high-school in Mardin, for example, was the product of a few visits by a Mardinian local businessman to Dr. Vahid Atak, owner of a private hospital and several shoe factories in Istanbul. (3) In the early years, most teachers in Hizmet educational facilities were ethnically Turkish; but as Kurdish volunteers in the Hizmet movement increased in number, Kurdish teachers replaced them. Kalyoncu notes that, in fact, teachers’ western origins proved to be an advantage rather than an issue for concern. In the words of Hayri Bey, “Most of us were quite impressed to see teachers, who were originally ethnic Turks from modern western cities like Istanbul and Izmir, coming to the underdeveloped Southeast and preparing ethnic Kurdish and Arab students for the university admissions test.” (4)

The 1990s witnessed rapid proliferation of sohbet groups in every Kurdish city and town, (5) but only after the European Union reform initiatives (2002-2004) did Hizmet activists become more visible in Kurdish civil society. A decrease in PKK violence enabled Hizmet volunteers to engage in large public projects such as charity organizations, village development associations, reading halls for poor students, and women’s fraternity clubs. The opening of democratic channels helped not only civic association development but also strengthened Hizmet’s reach to ordinary Kurds. In Nusaybin, for example, Hizmet’s prep school

Among the most powerful civic initiatives, reading halls are worth mentioning. In the past decade, Hizmet participants have established 25 reading salons in Diyarbakır alone, serving more than 3,000 students annually. One of the directors of these salons indicated that maintenance of a single reading salon requires almost YTL 100,000 (about USD 55,000 at the time) annually. (7) In addition to full-time teachers, some volunteer teachers in public schools work on weekends. The reading salons are active not only in the eastern and southeastern provinces, but also in Kurdish-populated suburbs in western cities such as Izmir and Mersin. According to one estimate, the Hizmet movement has reached over 140,000 students across the country by establishing free reading halls in shantytowns. (8) 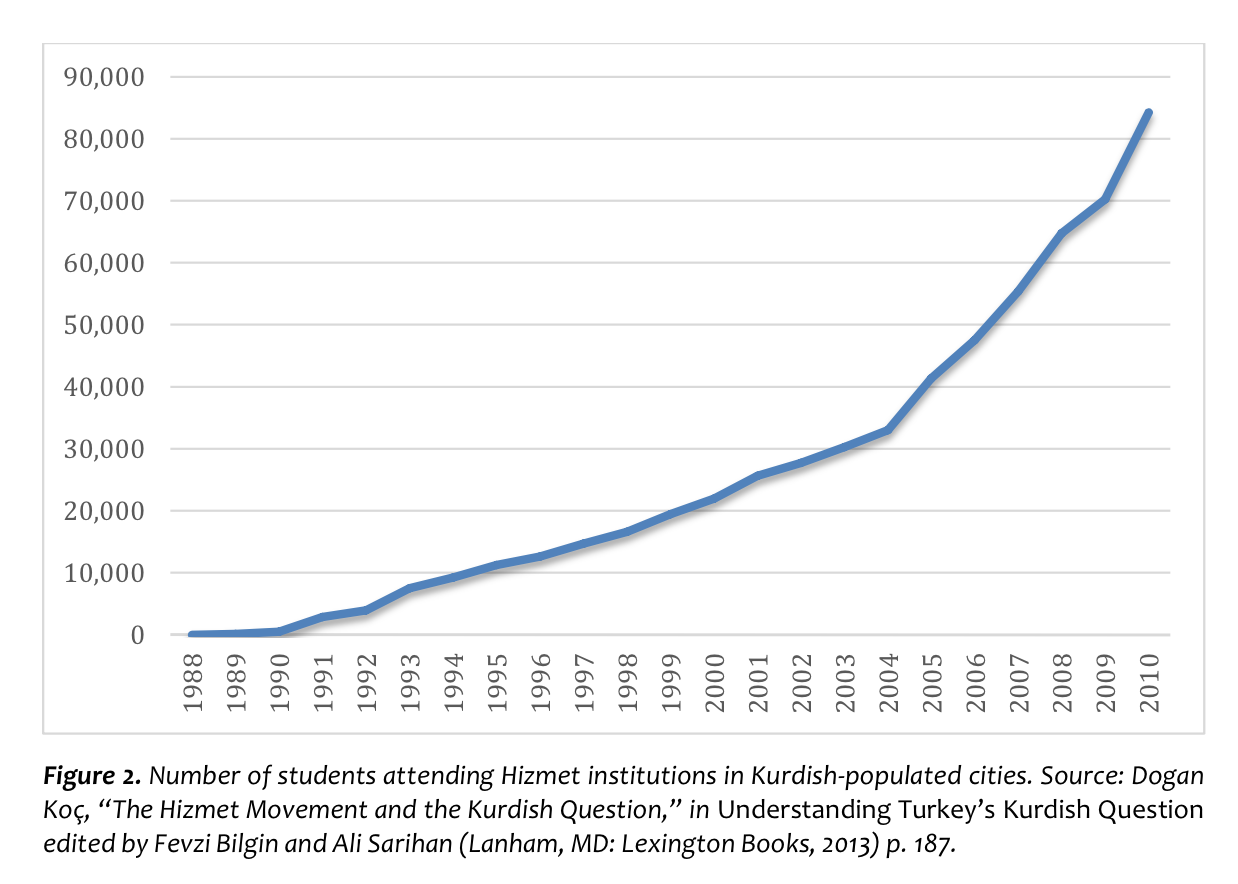 The number of private schools and prep centers also increased rapidly. Offering high- quality education from kindergarten through grade 12, private schools charge tuition and are not as numerous as prep centers. Yet, 20% – 25% of students in these schools receive full scholarships; the schools operate in every city, including Dersim (Tunceli). (9) By the year 2009, the overall number of Hizmet educational institutions in Kurdish-populated provinces was 289, with 84,282 registered students. (10) As Figure 2 indicates, enrollment numbers skyrocketed after 2004, increasing at an average rate of 8,544 students per year. (11)

Moreover, Hizmet’s charity activism in the past decade has supported its educational ventures. The movement’s nationwide charity organization Kimse Yok Mu began opening branches in the region in 2004. Kimse Yok Mu has its origins in a show of the same name on Samanyolu TV, a channel established by Hizmet volunteers in 2002. Kimse Yok Mu literally means “Isn’t anyone out there (to help)?” Although the organization’s primary focus is relief rather than poverty alleviation, it has paid attention to victims of endemic poverty in the Southeast. Kimse Yok Mu branches had rapidly mushroomed all over Turkey by 2007.

In 2006, after severe flooding struck Kurdish-populated Eastern Turkey, Kimse Yok Mu distributed the equivalent of almost EUR 2 million in supplies. Hizmet volunteers regard Islamic holidays as special occasions for charity distribution. Kimse Yok Mu annually sets up Ramadan tents and distributes meat during the Feast of Sacrifice, an Islamic ritual known as Eid Al Adha. Launching a major campaign, the organization aided about 17,000 families in 2006 and 60,000 families in 2007 in celebration of the Feast of Sacrifice. (12)

One particular feature of the Feast aid is striking: local Kurdish Hizmet activists invite Turkish Hizmet activists from the western regions of Turkey to attend the Feast observation and make donations to families directly. Each year, thousands of Turkish activists distribute meat to the needy during the Feast of Sacrifice, visiting the region for the first time in their lives. (13)

Alpay, a local representative of Kimse Yok Mu, told me that this is a helpful way to create bridges between Kurds and Turks. He told the story of a businessman from Istanbul who was so prejudiced about Kurds that he wouldn’t employ them in his factory. As a donor to Hizmet initiatives in Istanbul, he was invited to participate in one of the Feast of Sacrifice campaigns by Kimse Yok Mu. After visiting the region for the first time and distributing meat to the needy, the businessman regretted his bigotry.

Thus, Hizmet’s charity activism is aimed at removing prejudices in both Turkish and Kurdish constituencies, and accordingly, building social trust in the long run.

(13) In the initial phase of the campaign in December 2006, for example, 18,073 people from Western Turkey visited the region as Kimse Yok Mu volunteers. See Koç, “The Hizmet Movement and the Kurdish Question,” p. 191.

Gülen’s Rethinking of Islamic Pattern and Its Socio-Political Effects

In Turkey Fethullah Gülen’s community has been a powerful player in the national debate about the place of Islam in individual and collective life. Through emphasis on the…

The Spread and Institutional Development of the Gulen Movement: Community Integrated Businesses

Motivation Driving the Financial Contributions to the Gülen movement

When asked why they give $1 million or more dollars each year to movement projects, the group of businessmen in Istanbul gave the following reasons: to make better…

In the email Ahmet Özal says: “Definitely, trustees will be appointed to Turgut Özal University. … I think the esteemed president will also be happy if I cleanse Turgut Özal University [of Gülen sympathizers] and end the association between that community and my father’s name. I would be very pleased if you could convey this issue to the president [Erdogan] and help me get his support and approval.”

Leaked emails of Turkey’s energy minister and son-in-law of President Recep Tayyip Erdoğan, Berat Albayrak, have revealed plans by a pro-government figure to assume ownership of a dormitory in Kayseri province that used to be operated by the Gülen movement but was closed down by the Justice and Development Party (AKP) government.

Tables Have Turned for Some Media in Turkish Crackdown

Mr. Kenes says he should have been more outspoken in defense of fellow journalists when the government started targeting its critics more than a decade ago. “Frankly, we did not realize Mr. Erdogan’s real intentions,” said Mr. Kenes, who was convicted last year of insulting the president on Twitter and given a 21-month suspended prison sentence. “When I look at my history, I criticize myself for not showing more sympathy for their cases.”

Turkey’s Purge Could Cause a Massive Brain Drain

The purge by the Turkish government has led to the arrest of thousands, including many academics. In addition to the purge, the government has invoked military law, set curfews and limited social media.

Briefly detained for taking photos of the street next to the Istanbul’s Gayrettepe Police Station, the journalist Tuğba Tekerek has talked about her detention period, shedding lights on what people, jailed as part of the government’s ever-increasing crackdown on the Gülen Movement, get through behind bars.

But while U.S. agency spokesmen are trying to be cautious in what they say, skepticism about Turkey’s claims that Gulen directed the plot are widespread in Washington. Last week, in comments that likely burned a few ears in Ankara, U.S. Director of National Intelligence James Clapper told The Washington Post that he did not believe Turkey had yet offered enough proof to implicate Gulen, who has lived in Pennsylvania’s Poconos region for years.

Turkey has asked Pakistan to crack down on institutions run by US-based cleric Fethullah Gulen, who Ankara believes was behind the failed coup against President Erdogan. But many Pakistanis do not want to follow along.

US Congressional Record: President Erdogan’s Assault on the Human Rights of the Turkish People

I rise to remind our government that the human rights abuses committed by Turkish President Erdogan are grave and ongoing, and to distinguish between the Turkish president and the Turkish people-and to stand with the people.